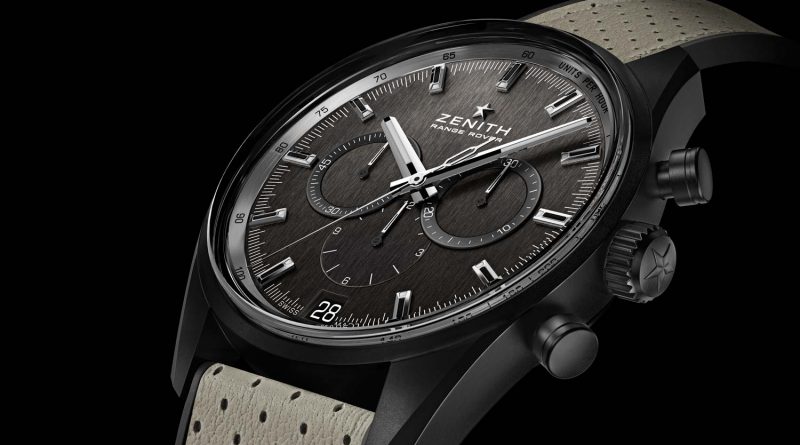 Two champions of their individual industries with entwined destinies. Zenith unveiled the El Primero chronograph in 1969. It was in the same year, when Land Rover introduced the prototype of the very first luxury off-roader: the now iconic Range Rover. Driven by their pioneering spirit and the urge to explore new horizons, these two original creations set a new benchmark and achieved a legendary status. Almost half-century later, both products and manufacturer’s paths are crossing again and resulting in an exceptional long-term partnership inaugurated by an El Primero Range Rover Special Edition. 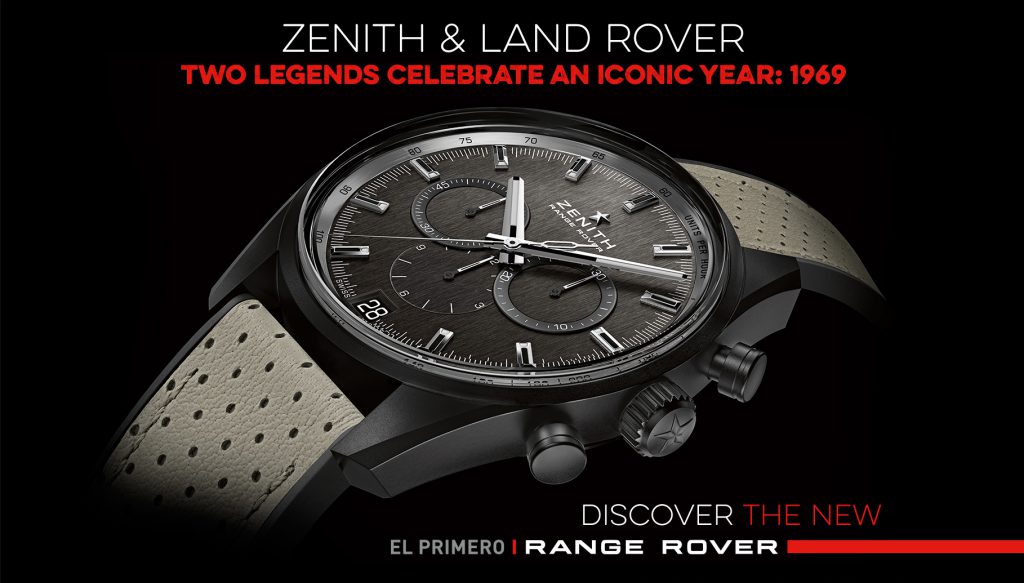 The El Primero and Range Rover models are cornerstones of their respective fields. Archetypes of desire and aspiration. Their manufacturers Zenith and Land Rover – the world leaders in the realm of luxury, sports, and quality – are uniting in a partnership to celebrate the two legendary creations that have made an imprint on watchmaking and automotive history. To launch this partnership, Zenith presented a first exclusive El Primero Range Rover Special Edition, a distinctive timepiece that is equally at home at a cocktail reception as it is on rugged is terrain.

Aldo Magada, President and CEO of Zenith said: “The match between our two brands is very strong. Zenith and Range Rover are both pioneers in our respective industries, and we both create unique, innovative products. Through timeless design, both brands express authentic luxury. The Zenith team is very excited to start this long-term partnership with Range Rover, another superb brand and kindred spirit.”

Zenith and Land Rover are perpetual front-runners. Since 1969, which witnessed launches by both companies, their destinies have been entwined. Three years later, the two adventuring companies crossed paths when explorer John Blashford-Snell crossed the Darién Gap (an inhospitable marshland and virgin forest area on the border between Colombia and Panama) at the wheel of an early Range Rover and with an El Primero chronograph on his wrist. During this Trans-American expedition, both models demonstrated their extreme durability and their exceptional all-terrain capabilities. Since this shared adventure, years of innovation and fine-tuning have raised the original concepts – once simple, sturdy and ingenious – to the rank of timeless icons that have lost nothing of their authenticity.

Founded by Rover and owned by Tata Motors since 2008, Land Rover is a British car manufacturer specialising in sports utility and all-terrain vehicles.

Initially known for its 4×4 expertise, and robustly built cars capable of performing in the harshest environments. In 1969, the brand changed the course of motoring history by producing a new genre: an an all-terrain luxurious vehicle – the Range Rover. The world’s first luxury 4×4 boasted incomparable on- and off-road performance. In addition, its pragmatic design earned a widespread acclaim. 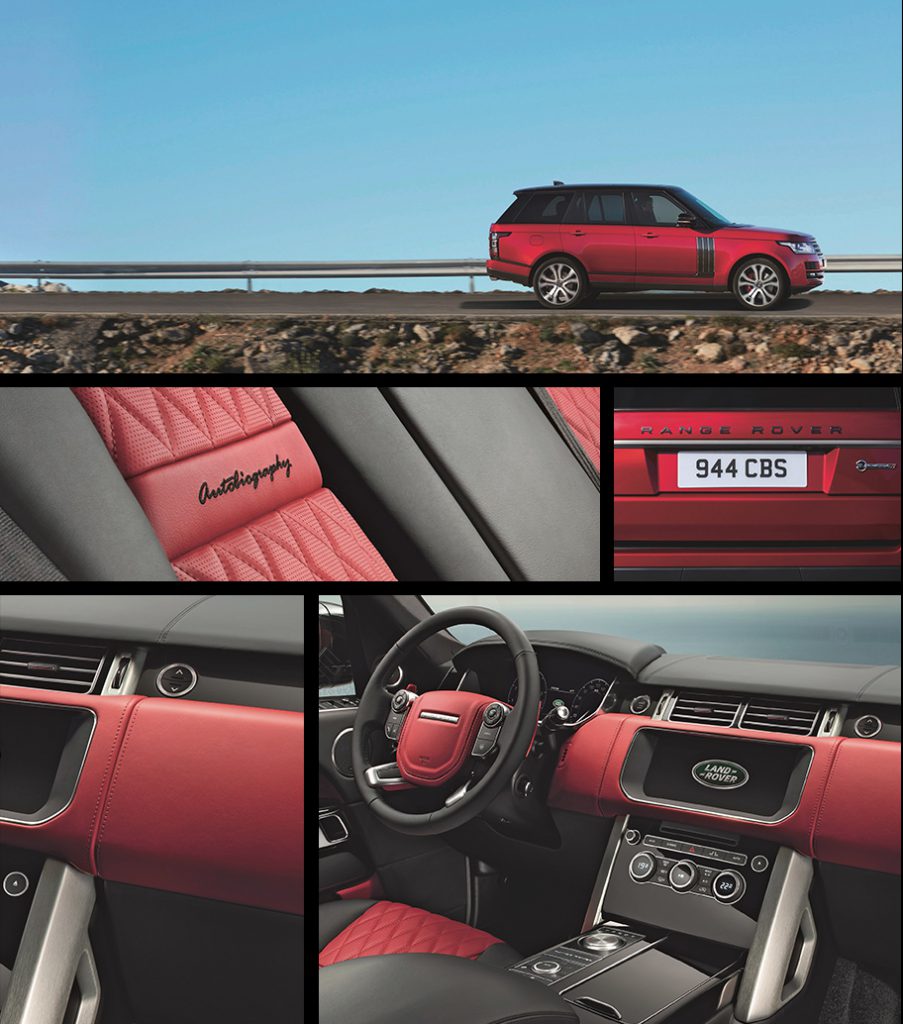 Zenith’s tribute to the first luxury SUV, presents a brushed grey dial bearing the inscription “Zenith Range Rover”. Tands and hour-markers are rhodiumed and luminescent. The high-frequency mechanism is encased in aluminium ‘bodywork’ – a nod to the Range Rover chassis. Water-resistant to 100 metres and sealed by a cambered sapphire crystal, it is equipped with a ratcheted crown and black round pushers. The sapphire caseback bearing the “El Primero Range Rover / Special Edition” engraving reveals the oscillating weight, marked with the Zenith and Range Rover logos.

It remains unmistakably an El Primero, but allude to Range Rover DNA. Gerry McGovern, Land Rover Chief Design Officer said: “We looked to the reductive nature of a modern Range Rover interior and the Zenith team translated that into the dial of the watch, keeping it simple and unfussy. The matt finish simultaneously suggests understatement, sophistication and durability – like a Range Rover, it’s an object you look at and immediately feel an emotional connection.” adds McGovern. 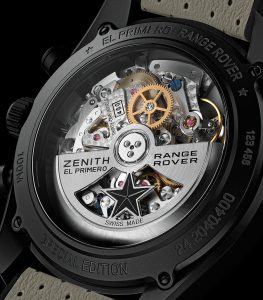 At the heart of this special Range Rover edition is the automatic El Primero 400B movement. With its fast-paced beat of a staggering 36,000 vibrations per hour enabling it to power a tenth of a second display. El Primero ‘engine’ is a worthy heir to the world’s most accurate series-made chronograph developed by Zenith. This 326-part movement drives central hours and minutes hands, along with chronograph and tachymeter functions, while ensuring an a respectable 50-hour power reserve.

Whether on the wrist of an intrepid explorer or a dapper gentleman, the El Primero Range Rover Special Edition exudes a chic aura, enhanced by a rubber strap coated with ivory-toned perforated calfskin or blue perforated calfskin. This leather is the same high quality hide used on Range Rovers and is secured by a triple folding clasp in DLC-treated titanium. A watch to embrace the legend. 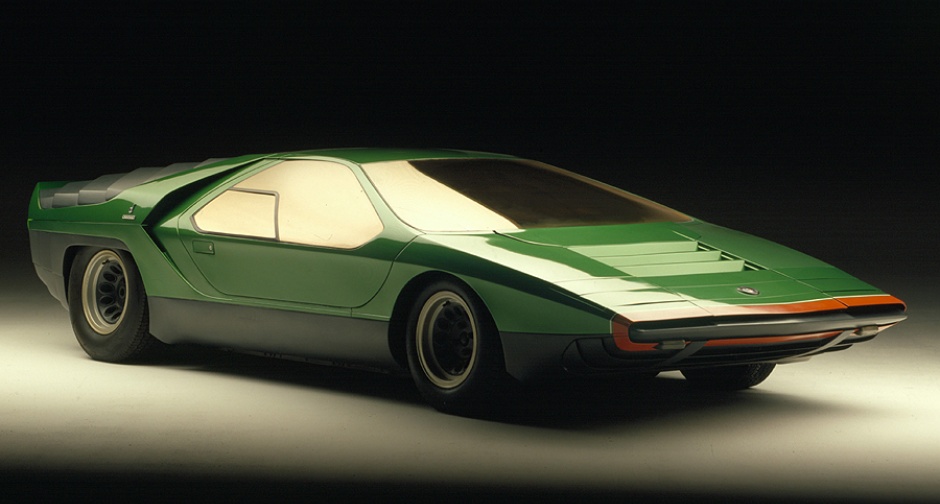 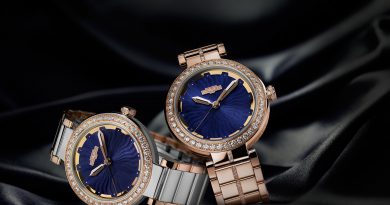 DeWitt creates an Empire for women 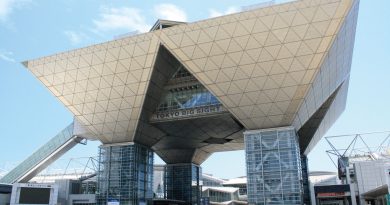 Beyond the Motor – The Tokyo Motor Show